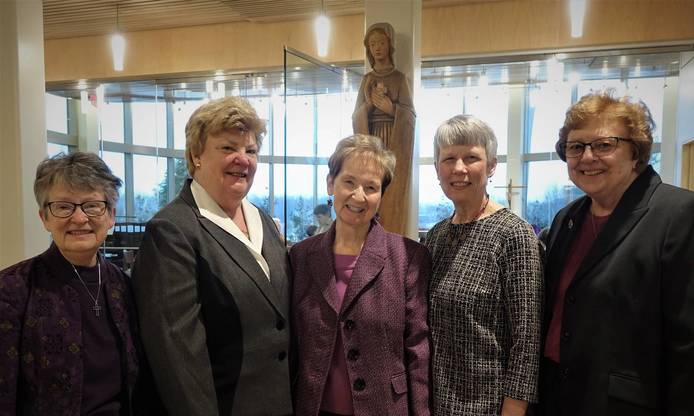 The Ursuline Sisters of Cleveland selected a new leadership team during community meetings last week at Merici Crossings, their Pepper Pike residence and congregational center.  The five-person team, including a president and four council members, will serve a four-year term, implementing the directional plan set at their meeting.

Sister Ritamary Welsh will assume the office of president in June, succeeding Sister Susan Durkin who served in that role for eight years. Sister Ritamary currently serves as Major Gifts Officer in the development office of the community where she also took on the director role of the recent Ursuline Sister’s Bold Faith Capital Campaign.  Her previous ministries include, Educational Consultant for SDG Advisors and President of Beaumont School. This is not Sister Ritamary’s first time on the leadership team, she served two terms on the council from 1992 – 2000.

The election and direction-setting gathering known as Chapter takes place every four years. Through prayer, dialogue and discernment, sisters identify future directions and strategies to advance their mission of transforming society through contemplation, justice and compassion.  Their focus centers on empowerment, direct service and systemic change for and among the oppressed, especially women and children, both locally and globally.

About the Ursuline Sisters:  The 131 Ursuline Sisters of Cleveland are dedicated to transforming society through contemplation, justice, and compassion.  Education has always been the Sisters’ primary ministry, with a special emphasis on families, women, the economically poor and the powerless.  The Ursulines continue to adapt their educational ministries to meet the changing needs of the Church, and also serve in prison ministry, pastoral ministry, chaplaincy, social work and ministry to the elderly and sick. The Ursuline Sisters have served the people of Greater Cleveland since 1850.

Join us in Reflection

The sisters help you begin each week with some points to ponder.