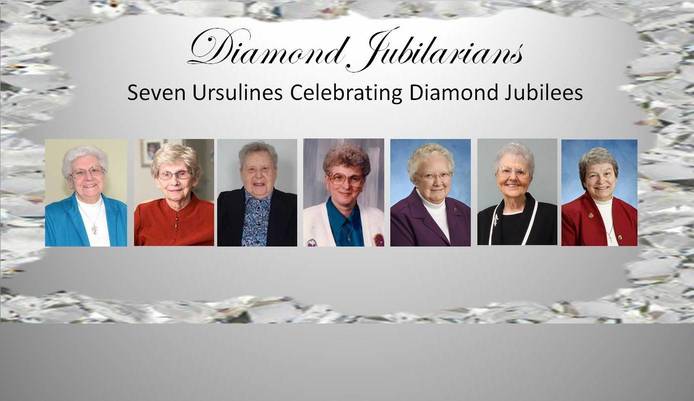 The Jubilarians of 2020 join the celebration.

Sister M. Lucia entered the Ursuline Sisters from Immaculate Conception Parish in Willoughby, Ohio. She was educated at Immaculate Conception School, Villa Angela Academy, and attended St. John College and Ursuline College. Her talents as an artist and educator were recognized throughout her education, and she earned a Master of Fine Arts (MFA) from the Rochester Institute of Technology in New York. After entering the Ursulines in 1950, her first assignment was St. Jerome School in Collinwood. She was assigned to Immaculate Conception School twice, and taught the grade school students at St. Mary in Collinwood, St. Ann, St. Malachi, and Holy Cross. In 1968 she began her high school ministry as art instructor at Villa Angela Academy until 1985. From 1985 to 2012 she served as art instructor at Beaumont School. Her love of art and ministry also led her to serve evenings as Adjunct Professor at Ursuline College from 2002 to 2004 and instructor at Ursuline ArtSpace from 2005 to 2011.

Upon retirement in 2012, Sister Lucia established an individualized program of art entitled Studio One on One for retirees and ministers with creative projects for people at the Homeless Center as well as the sisters at Regina Health Center and Light of Hearts Villa.

As Sister considers her 70thanniversary, she states: “Celebrating Jubilee is a reflective time for me as I look back with joy and gratitude over my years in religious life. I picture it as the woven tapestry of a seamless garment containing a design of the things most important to me…belonging to God, belonging to a loving family, friends and community, and being allowed to share in God’s creation as an artist. The word ‘seamless’ seems to best describe these 70 years as an Ursuline, blending my love for the contemplative with ample opportunities for a very active ministry. Throughout my earlier period in elementary, high school and college education and now retirement, I was doing what I love best—teaching art! This for me is in essence sharing all God has given me with my family, friends and community.”

Sister Mary Sterle (formerly Sister Mary Christopher) came to the Ursulines from St. Paul School in Euclid. Her teaching ministry was dedicated to grade-school students from the East Side to the West Side and eventually took her to service for high school students.

Sister started her teaching career at St. Mary Magdalene School in 1952. Over the years, her ministry and love for her students carried her to St. Francis de Sales in Parma; St. Robert, Holy Cross, and St. Paul in Euclid; a return to St. Mary Magdalene; and Immaculate Conception, Willoughby. She served little ones at St. Joseph Collinwood preschool from 1997 to 1999. Sister then ministered to the not-so-little ones at Beaumont School for three years.

When Sister Mary left the classroom, she definitely did not leave her teaching ministry. She served at the Ursuline Institute of Learning for over ten years before retiring. Her ministry days are not over, however. She continues a ministry of prayer at Regina Health Center.

Sister Therese Martin entered the Ursuline Community from St. Therese Parish in Garfield Heights.  Following the example of her older sister, Sister Mary Arthur, Sister’s ministry journey took her to the halls of a number of elementary schools in the diocese.  For 37 years she taught in grades one through four—at both St. Mary and St. Joseph (in Collinwood); at St William and St. Clare (on the East side of Cleveland); at St. Francis de Sales, St. Malachi, and St. Charles  (on the West Side); and at St. Joseph (Avon Lake). She loved the classroom, but midpoint in her career she moved from relating to young children to relating to older adults. Her ministry assignments were then to serve the Ursuline Sisters’ motherhouse community in a variety of ways: as the coordinator of Merici Hall (the entire group of sisters living at the motherhouse at the time); then as treasurer and coordinator for the St. Angela Center community, those sisters living in the nursing home wing of the motherhouse. When the St. Angela Center closed in 2012, the sisters moved to Regina Health Center and Sister Therese Martin helped them with the adjustment and to form a little community in their new location. In December 2016, she became a resident at Regina herself and still serves a leadership role with those sisters. Sister Therese Martin has devoted her whole life to helping people of all ages to grow, to assist them to move on to the next grade, the next challenge, the next life.  In her own words, “The ministry that has impacted my life the greatest is that of being present as one of our sisters begins her earthly journey (to eternal life).  It is my greatest privilege to support her with my presence and prayer as her Loving God comes to lead her home.”

Sister Mary Benedict entered the Ursuline Sisters from St. Benedict Parish. Her dedication to teaching middle and upper grade students carried her through ministry at several grade schools in the Diocese of Cleveland. From 1952 to 1969, she taught fifth, sixth, seventh and eighth grades at St. Mary Magdalene, St. Ann, Christ the King, St. Clare and Immaculate Conception Schools until she moved with some of her students into high school.

Sister Mary Benedict’s career in secondary education began at Villa Angela Academy, where she served from 1969 to 1973. In 1973 she moved to Beaumont School and served the students there until 1980 and again from 1986 to 1991 after moving her residence to the motherhouse in 1980. Near the end of her years at Beaumont, she also engaged in adult education at St. Angela Merici Parish in Fairview Park.

At the Ursuline motherhouse, Sister Benedict was not one to remain idle when opportunities to serve her sisters were available. She assisted the General Treasurer of the Ursuline Sisters as well as with transportation and as a driver for the senior sisters. Her ministry included doing recycling for the local motherhouse community. She also continued to use her skills as a teacher at St. Basil Parish, where she taught in the Parish School of Religion. She taught adult courses for the Arthritis Foundation for several years. She moved to Regina Health Center in August of 2015, where she continued her apostolate of prayer and service.

When Sister Eileen Mary entered the Ursuline novitiate from St. Philomena Parish, little did she know all the ground she would cover in the next 70 years of ministry.  She undoubtedly presumed that she would be a teacher and her first 18 years of service were spent in educating children at Holy Cross and Saint Ann parish schools. Subsequent education and experiences led her to help high school and college level students.

Sister served at Villa Angela as a guidance counselor for 3 years and then spent 17 years as Psychology Professor and Director of the Counseling Center at Ursuline College plus as adjunct instructor at John Carroll for a couple of summers. Sister also earned a PhD in Psychology from Kent State University and the following year took the exams that certified her to be a fully licensed psychologist.  In addition to four years on the congregational leadership team, Sister spent the remainder of her long and productive professional life in a variety of roles, such as private practice psychologist with an office on Chagrin Boulevard, private practice psychologist in Ursuline’s Sophia Center for 10 years, and consultant psychologist for religious communities and nursing homes for 30 years.

Today Sister continues in her quiet unassuming way to volunteer as opportunities arise. Looking back on her 70 years of religious life, Sister Eileen Mary is grateful for having had such a wide variety of opportunities to serve, and especially for the Ursuline companionship she has enjoyed.

Sister’s leadership positions were: President of the Sisters’ Senate (1977-1979); Representative for Religious Women to the Advisory Council of the Bishops of Ohio; The Bishop’s Committee on Desegregation and First Councilor on the Ursulines’ Leadership Team. She served on the Executive Committees of the Commission on Catholic Community Action (1976-1980); Cuyahoga County’s Catholic Social Services; Parmadale’s Family & Children Services’ Advisory Board and the Catholic Charities Services Corporation’s Board of Trustees. She was a Baccalaureate Program Directors’ representative to Council on Social Work Education’s (CSWE) Commission on the Role & Status of Women. Sister was awarded YWCA’s Women of Excellence  (2002) for her work on the Church in the City‘s Health & Human Services Forum and Circles of Leadership: Empowering African American Women, linking women from Hough’s Fatima Family Center with the African American women at Ursuline College.

Reflections on the 60th Jubilee Year: It has all been in and through our motto: Soli Deo Gloria.  Who would have thought it in 1960! I am grateful for the many opportunities I have had as an Ursuline. I am grateful for the contributions of the Social Work Program and its contributions to the Greater Cleveland community through its graduates. I appreciate the support of the Ursuline Leadership Teams and the Ursuline Presidents of Ursuline College.  I am grateful for the friends and family who created the Sister Kathleen Cooney Social Work Scholarship to assist students achieve their goals. Being an Ursuline has been a Call to growth in relationships and witness of essential Gospel values. Thank You to all who have been part of my life as an Ursuline Sister.

Sister Ann Letitia’s love for students of any age has prompted her to serve whenever and wherever the opportunities present themselves. She entered the Ursuline Sisters from Holy Cross Parish. The majority of her ministry experience has been in the field of education, both as teacher and as administrator.

Her warmth, humor, and ability to connect with people provided the skills she used in 1996 until 2013 at Beaumont School as Admissions and Recruitment Assistant, as well as her work in the Finance Department with the tuition and work-study and transportation programs. Her abilities were appreciated at Beaumont as demonstrated by her assignment in Development working with the donors and students.

In 2012, Sister Ann Letitia began another ministry as member of the Leadership Team of the Ursuline Sisters. She served in that role until 2016. She also devoted her services to the role of the congregation’s vocation director and liaison for the Social Justice office. Following her term in leadership, she devoted her love, skills, and talents to the Ursuline congregation as coordinator for the Ursuline Sisters residing at Regina Health Center and Light of Hearts Villa.

Sister Ann Letitia is a witness to the joy that loving service multiplies in an Ursuline’s life. She reflects, “I love being an Ursuline and just feel so grateful to God for being able to bring His message of joy to so many people. I truly am blessed in having been touched by the goodness and kindness of all whom I have ministered to and how they have helped me grow in God’s love and in the spread of the Gospel!”