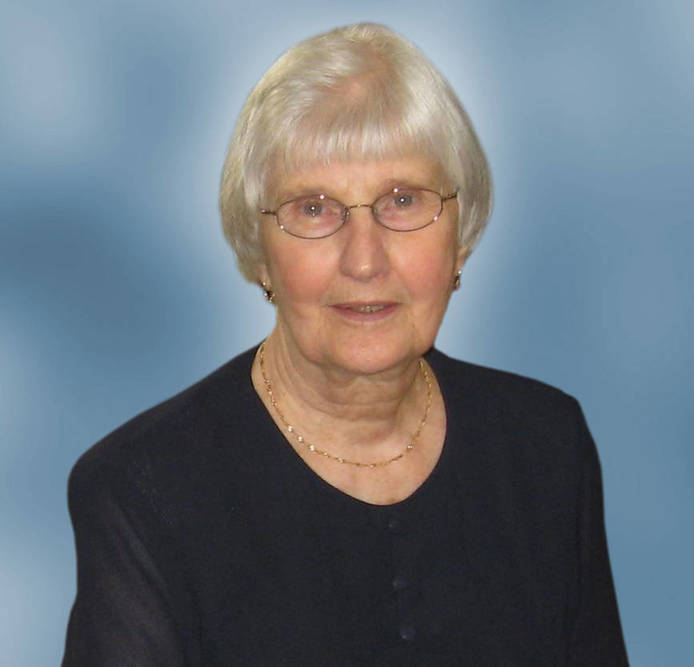 Always a lady…infectious laughter…ever a Maumee girl…faithful daughter of Angela…well pressed and sharply turned out…compassionately supportive…phrases that all spring to mind immediately when we recall Sister Marie Michelle whose life spanned nine decades in northern Ohio.  An Ursuline sister for 70 years, Sister Marie Michelle loved her family, her community and her varied ministries that introduced her to beloved friends and colleagues, students of life together in countless ways.

Rosemary was born in 1929 to Nestor and Edith Gouttiere in Maumee, Ohio.  She spoke fondly and often of growing up with her brothers Adeamer and Franz and proudly proclaimed her Belgian heritage in both English and French. As in-laws and nieces and nephews were added to the family, Rosemary cherished each one.

Rosemary enjoyed her years at St. Ursula Academy in Toledo and attended Mary Manse College as well as the University of Toledo, later graduating from Ursuline College in Cleveland, a linguist studying English, Latin and French.  She attained her Master’s degree in French from Western Reserve University and also studied at John Carroll University.

After a brief sojourn into ministry in elementary education at St. Mary Magdalene School, Sister Marie Michelle began a long tenure at the high school level. While at Villa Angela Academy and Beaumont School, she taught French, religion and English. She also served in administrative roles. Subsequently, she served at Ursuline College and then worked at Edward Luttner Associates using her organizational finesse and finely honed interpersonal skills.

In her seventh decade of life, Sister Marie Michelle reached out into a new sphere and began volunteering at the Hospice of the Western Reserve where she remained for 15 years. During this time she also served in the congregational Development Office and tutored in the Ursuline Institute of Learning.  While others in the world around her were enjoying retirement, Sister Marie Michelle was putting transferrable skills into practice in new ventures and learning fresh ones.  Additionally, she was able to travel with family and her friend, Sister Veronica, which continued to broaden her perspective on the world.

In recent months, Sister Marie Michelle was amazed to hear from alumnae who continued to value her role in their lives. However, no one else was surprised because Sister’s individual attention to each person contributed to their sense of value and the knowledge that they were beloved of God.  Nieces and nephews recall that same loving care as well as her joie de vivre.

Although Sister Marie Michelle was 91, her death came as a shock to all because it was sudden.  Nonetheless, those who know her well reflect back on recent months and can see that she was preparing in her own way for her final journey home to God. How fitting that she died at Hospice of the Western Reserve after volunteering there for so many years. She ended her life as she lived it, organized, contemplative and enjoying the small moments of wonder in the presence of loved ones.

Sister Marie Michelle will be remembered with laughter and love, a woman who appreciated beauty, recalled memories of good times vividly, cherished both quiet times of prayer and spirited gatherings with family, sisters and friends.  She was gracious, faith-filled and loyal to the end.

She was preceded in death by her parents, brothers and sisters-in-law. She is survived by nieces and nephews spread across the United States.

Funeral Service for Sister Marie Michelle will be private because of the pandemic.

Memorial donations may be made to the Ursuline Sisters of Cleveland:  www.ursulinesisters.org